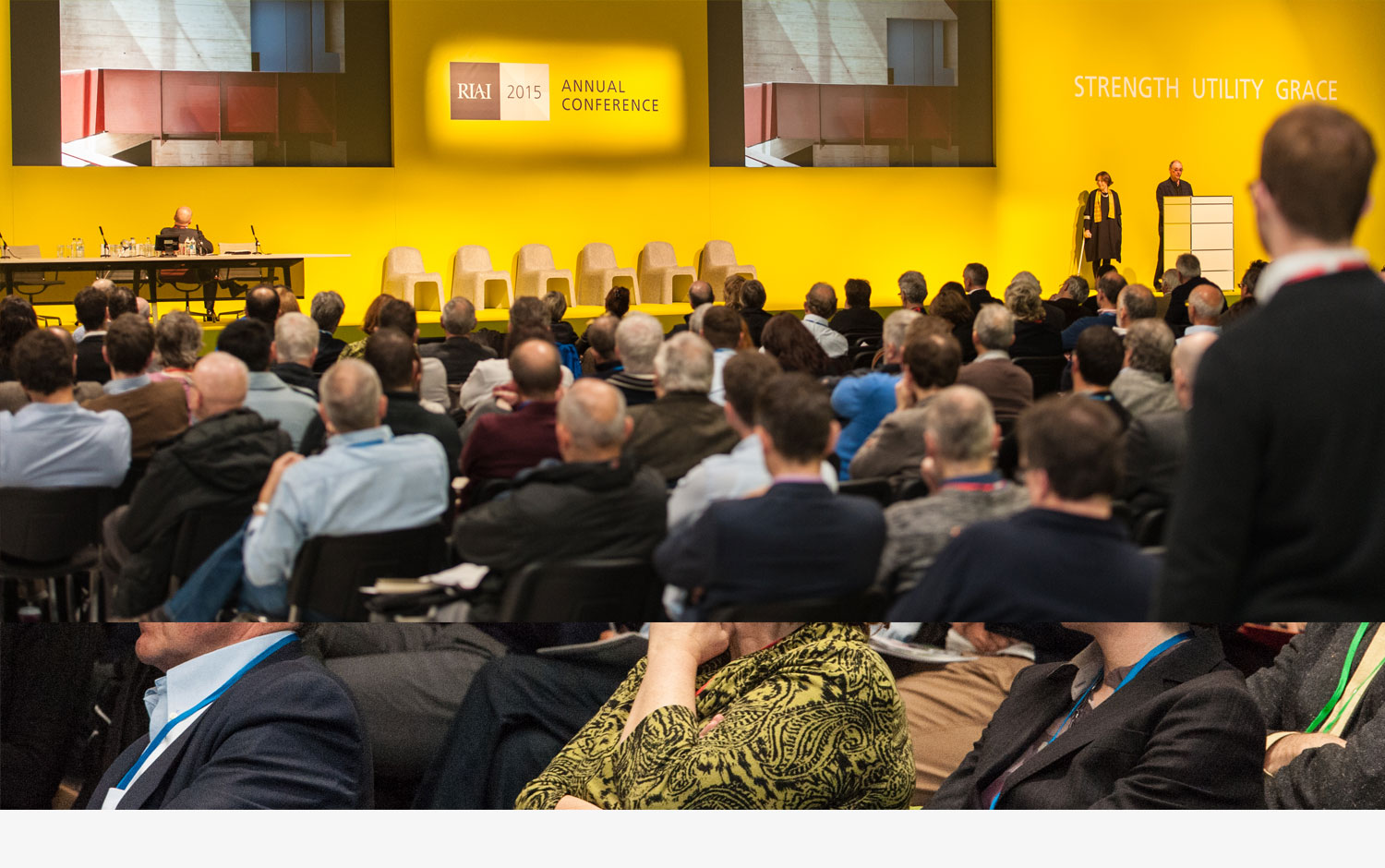 The largest gathering of architects and architectural technologists in Ireland – the RIAI Annual Conference – took place on 4 and 5 October in the RDS, Dublin. This year, a record of 645 delegates attended over two days. The conference was accompanied by Architecture Expo, which also recorded the highest number of exhibitors and visitors to-date. The RIAI Annual Conference is a chance for architects and architectural technologists to find out about the latest developments in Irish design and technology, and be inspired through the exchange of ideas and collaborative potential. It is also an arena to showcase a variety of recently completed works and celebrate the achievements of new and old faces to Ireland’s architectural landscape.

Speakers presented on a stage designed by Amanda Bone Architects. The staging itself was simplicity in design combined with bold colour and timeless furniture. Visitors to Architecture Expo and the conference were welcomed by the installation ‘Unearthed’ by NÓS Workshop.
This year’s conference theme focused on ‘Strength, Utility and Grace’; the concept chosen by RIAI President Robin Mandal was based on Vitruvius’s three essential architectural qualities. From 1990 to 2008 the conference was held outside of Ireland visiting cities that had a resonance with some aspect of Irish development. Cities have included Vienna, Berlin, Glasgow, Paris, Trieste, Barcelona, Lisbon, Bordeaux, New York and Chicago. In its seventh year on home soil, the conference highlighted Ireland’s strong position on the worldwide stage and likewise presentations from international speakers demonstrated Ireland’s place within a global context.

International Speakers
Attendees were treated to a selection of international speakers which included Hubert- Jan Henket, Founder and Honorary Chairman of DoCoMoMo International, who opened the conference with ‘Sustainable Modernity.’ He called for people to remember the original idea behind the Modern Movement. The cross- disciplinary exchange of ideas was illustrated by Dr Johnny Walker’s talk on ‘A Digital Healthcare’, which centred on enabling technologies that help transcends huge geographical distances in the Australian outback and the creation of a truly global network. Dr Walker’s talk cannot be discussed without mention of his impressive roll and recovery off stage! Peter Rich, of Peter Rich Architects from Johannesburg, spoke about ‘Way of Urban Futures.’ Rich’s statement “A house is not a home unless it is a village” had a particular resonance with an Irish audience. The Italian architect and President of the Architects’ Council of Europe, Luciano Lazzari, gave an insightful presentation on issues affecting architects throughout Europe.

Irish Speakers
The impressive list of Irish speakers included the London-based architect Niall McLaughlin. An ambassador for Irish design, he will represent Ireland at the Venice Architecture Biennale 2016. His presentation ‘Town and Country’ covered four recent projects: two urban housing projects in London; the Bishop Edward King Chapel, Oxford and a fishing hut in Hampshire for which he won the RIBA’s Stephen Lawrence Prize 2015. Responding to Dublin’s housing crisis, Niall emphasised that for low cost housing we need to find a simple architecture that supports urban life.Derek Tynan of DTA Architects – Winners of the RIAI Silver Medal for Housing 2009-2010 for Santry Demesne – presented innovative housing solutions and called for a new RIAI Ideas Competition for three housing sites.

Brian Moran, Senior Managing Director with real estate firm Hines, focused on the current un- affordability of housing, which he argued was due to high costs as a result of implementing current planning standards.

The topic of sustainability was represented by John Moran with ‘The Economics of Architecture’ on sustainable, economic urban space that will attract the rest of the world’s talent to Dublin. Additionally Brian Gilmore of Cement Manufacturers Ireland spoke on the indigenous resource ‘From Global to Local, Sustainable Cement and Concrete.’ The achievements of new Irish practices are recognised by the RIAI Best Emerging Practice Award. John McLaughlin of JMLA Architects was first to present his work as the winner of the 2015 award. John discussed his exhibition designs including the Pavilion of Ireland Venice Architect Biennale 2014 and his work for ID2015. Highly commended was Patrick Gilsenan of PG Architects and the two commended prizes went to Mark Costello of Strand Architects and Michael O’Connor of Praxis Architects.

A conference highlight was undoubtedly the keynote by O’Donnell + Tuomey Architects – introduced by Eric Parry – which received a standing ovation. Partners in life and in work, John Tuomey and Sheila O’Donnell spoke about their commitment to education, their influences and inspirations. John praised the role of the builder and master craftsmen with architecture as “a craft-based art” and a “civic-minded profession.”

Awards
The RIAI acknowledged contributions to the built environment with Honorary Memberships presented to Hubert-Jan Henket, Camilla McAleese, Under Treasurer and Honorary Secretary of Kings Inn and Chair of The Irish Landmark Trust and to Gerry Murphy, Publisher of Architecture Ireland. Along with sustainable design, planning and materials the conference typifies sustainability ensuring a new generation of architects are engaged through.

Architecture is not only the practice of design but the act of writing, making connections through the dissemination of theory and experience. The conference saw the presentation of the inaugural Architecture Ireland Student Writing Prize in association with Forbo to Sarah Mannion from the School of Architecture, University of Limerick with ‘Kalambaka and the Monasteries of Meteora.’ (featured in this issue). DoCoMoMo Ireland awarded its Dissertation Prize, with Hubert Jan- Henket, Miriam Fitzpatrick and Shane O’Toole presenting the prize to Karen Bell for her thesis on the Raheny Houses.

The RIAI is delighted about the support from its conference sponsors: Lagan Brick and Cement Manufacturers Ireland (CMI). Students of architecture and architectural technology were able to attend the conference for a reduced €10 entry free thanks to the sponsorship from CMI.