A Window to Recovery from China by John Curran, MRIAI

A Window to Recovery from China
by John Curran, MRIAI

Being Irish I am optimistic by nature, but the COVID-19 outbreak that appeared in China in late December dropped out of a clear blue sky and landed with a sickening disbelief.

My Chinese friends and colleagues, who could recall the SARs outbreak of 2003, gave me a reality check - they said things are going to change, and change quickly.

The virus first hung over Wuhan city like a dark cloud, before spreading out across Hubei province and beyond, at the speed of an airline jet.  My wife Ying is from Shiyan in Hubei province, and was fearful for her brother’s family, but she was also very relieved her mother was staying with us in Shanghai at the time of the outbreak.

The authorities were prepared and quick to respond, perhaps because of hard lessons learned from the SARs outbreak of 2003.  The police and army mobilised and Wuhan city, with a population of 11 million, was locked down inside two days, with the entire province locked down shortly after.  In any society these appear as extreme measures, but they limited the spread of the virus, and bought the China health care service time, to prepare for what was to come.  In a matter of weeks every city in every province was affected.

World media focused on the building of two hospitals in Wuhan city, completed in only 10 days.  What was perhaps more effective was the conversion of local Sports stadia into makeshift hospitals to isolate patients.  But new hospitals springing up overnight served as good propaganda – a show of China’s national strength in a time of crisis.

The Chinese people are very resilient, and have bounced back quickly after previous viral outbreaks and natural disasters.  I remember the earthquake of 2008 in Sichuan Province, which killed 87,000 people, left millions homeless. Many people, including foreigners, felt compelled to get involved and lend a helping hand, including John Curran Architects in Shanghai.  Even though our efforts were a drop in the ocean, we were selected to present our humanitarian work to the then President of China, President Hu Jintao.  Lesson learned: when you help a country out of compassion and are not solely motivated by money, good Karma comes back.

By mid-February every city was in a state of lockdown including our home city of Shanghai, with its population of 25 million people.  Even though China is a developing country, it embraces new technology quickly.  The movement of people using their ID numbers was closely monitored.  Every city created a QR code for every citizen using a new app downloaded onto a smart phone.  When entering a train station or an airport or even a supermarket, the person’s QR code was checked to determine where they had been, before either letting them pass, or refusing entry (if they had travelled from a red zone area in the country).

With people confined to working from home, I had a lot of ‘window wiper time’. It’s during these moments we tend to look back at all the highs and lows, to get a sense of perspective. There is no concealing the fact the economy has suffered a big setback, with most businesses not yet back on their feet, and a yet to be determined number not reopening at all. 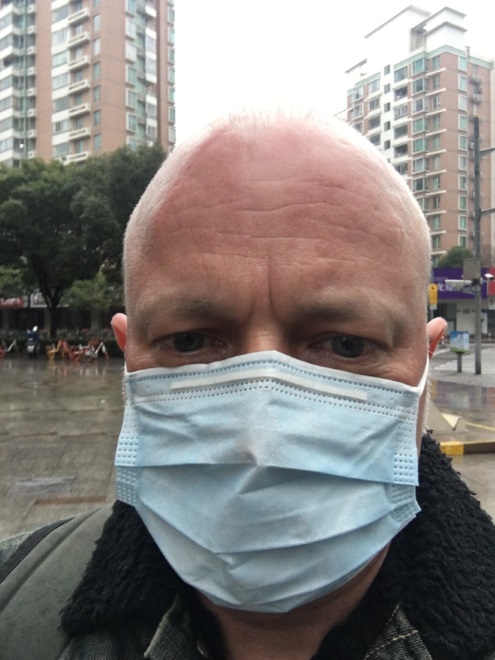 John Curran - Life behind mask: It’s still life behind a mask, for now, but life is slowly resuming, schools are reopening, people are returning to their place of work

Our survival and relative prosperity in China can be attributed to one thing - fostering close relationships with local government clients over the past 16 years, which allows us, a small Irish practice of 20 people operating in Shanghai, to compete with big international players (Gensler, KPF, SOM, RTKL, Wilkinson Eyre … et al), and on occasion win, by demonstrating we dig deep in our research of local people, place and heritage.  In other words we care. Over time, as project dreams turn into reality, by word of mouth the message gets out - we can bring about positive change, for the benefit of all, both in the public realm and for commercial stakeholders.

It’s still life behind a mask, for now, but life is slowly resuming, schools are reopening, people are returning to their place of work. This has been the year of the Pandemic, it’s been paralysing, a wave of human suffering.  It has also been a RESET year, where people realise, without health we have nothing. It has been a year of compassion, where people, perhaps for the first time in their lives, check on their immediate neighbours, bringing supplies to the elderly.  There is a growing voice on China’s popular social media WeChat, questioning the meaning and value of endlessly buying imported luxury goods.  There is a call to ‘Buy Sensibly & Buy Chinese’.

I would like to echo that sentiment to all my friends and colleagues at home in Ireland - as sure as day follows night, this pandemic will pass.  Buying Irish is a Window to Recovery, along a road to helping Irish businesses & jobs recover. Source locally, eat locally grown food. Holiday in Ireland to help our hospitality industry recover.

Before this pandemic landed we were all pondering Climate Change, without really doing enough to turn the situation around.  If this pandemic changes our behaviour for the better, perhaps there is a silver lining to this cloud.

John Curran studied architecture at the Dublin Institute of Technology (now TU Dublin), graduating in 1994, and is a member of the RIAI.  Originally from County Limerick, John set up John Curran Architects in Ireland, Hong Kong and, on the back of a competition win, in mainland China. He later set up his Irish architecture branch office based in Shanghai. Over the course of 16 years, John and his team have designed and completed over 700,000 sqm of award-winning, mixed use projects in cities across China (Shanghai, Fuzhou, Zhongshan and the Zhoushan Archipelago).  John met his wife Liu Hai Ying in Shanghai 10 years ago and they have three sons. Ying leads the interior design side of the studios output.