Town House Kingston University London has been chosen from a list of 532 works from 41 countries.

First Irish Architects to win Prestigious Award, is a ‘huge international accolade’ for Grafton Architects and for Irish architecture 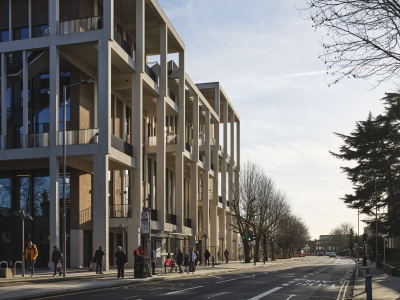 Ireland’s Grafton Architects have been announced as the 2022 Winner of the Mies Van der Rohe Award for contemporary architecture. (www.eumiesaward.com)

Organised by the European Union and the Fundació Mies van der Rohe, the prize is awarded biennially to the best architecture project completed in Europe in the past two years.  The original list of nominees featured 532 projects from 41 countries.

The Award will be presented to Grafton Architects founders Shelley McNamara and Yvonne Farrell on 12 May next. The Awards Ceremony will take place at the Mies van der Rohe Pavilion in Barcelona.

Yvonne Farrell said: “We are over the moon to have been awarded the Mies Van der Rohe Award for our work. Shelley and I are delighted to accept the Award on behalf of everyone in Grafton Architects. We have a fantastic team who are dedicated to designing beautiful buildings that deliver on their purpose. Today’s award acknowledges that this has been successfully achieved in Town House for Kingston University, London”.

Shelley McNamara said: “Kingston University, London bought into our vision for Town House and they were true partners with us on this prestigious project. We designed the six-storey Town House to act as the university's “front door”. We wanted to create a space which was inviting and welcoming to the local community and which fostered collaboration within its walls. This Award is a wonderful reflection on our client and on the entire team at Grafton Architects”.

According to the judges Kingston University is rewarded for its remarkable environmental quality that creates an excellent atmosphere for studying, dancing, gathering and being together. The building creates an emotional experience from within and through the multi-level façade colonnade that creates a domestic atmosphere on different levels. It accommodates dance, library and study spaces using layers of silence and layers of sound which work perfectly well together. This is the first time that a university building wins the architecture prize and it shows that there is a need for public educational projects with the quality of this one, which dignifies people’s lives through education and being together and gives the same educational possibilities to everybody.

Congratulating Grafton Architects, Commissioner for Innovation, Research, Culture, Education and Youth, Mariya Gabriel, said: “I congratulate the winners of the EU Prize for Contemporary Architecture – Mies van der Rohe Award, who have demonstrated the creative and innovative potential of European architecture. It is particularly encouraging to see the contribution of contemporary architecture to improving the well-being of citizens in Europe like we are also doing with the New European Bauhaus.”

Grafton Architects co-founded in 1978 by Yvonne Farrell and Shelley McNamara, have a strong expertise in educational buildings and two others, were nominated to the 2022 EUmies Awards – Institute Mines Télécom in Paris and Toulouse School of Economics in Toulouse. University Luigi Bocconi in Milan was a finalist in 2009.

This latest accolade is further international acclaim for Grafton Architects work. In 2020 the practice was awarded both the RIBA Royal Gold Medal and the Pritzker Prize for Architecture.  Presented to Grafton Architects founding directors Shelley McNamara and Yvonne Farrell, the Pritzker Prize is considered the highest honour in the architectural profession. In 2021 it was awarded both the RIBA Stirling prize and an Architectural Association of Ireland Award for the Town House, Kingston University London in addition to the L’Equerre d’Argent, the most prestigious architectural honour in France, for the Toulouse School of Economics.