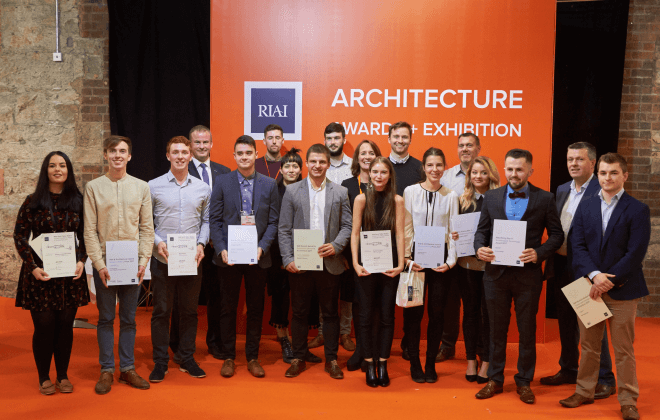 The awards were as follows;

RIAI Scott Tallon Walker Student Excellence Award for Architecture 2017, sponsored by Scott Tallon Walker Architects in memory of the firm’s three founding partners, Dr. Michael Scott, Dr. Ronald Tallon and Robin Walker.
The award aims to promote the study of contemporary architecture, encourage and foster architectural excellence among the student body, encourage and facilitate communications between the schools and provide a basis for growing awareness of the architecture in society through exhibitions and publications supported by the RIAI. This is the second year of the newly designed award (it was formerly the RIAI Travelling Scholarship student award). It seeks to recognise and reward excellence in final year architectural studies and create a platform to showcase the work emerging from Irish schools of architecture.

Rebecca–Jane McConnell (Entry no. 350) - GARDEN OF BELFAST DELIGHTS
Jury Citation:
“As icecaps melt and sea levels rise, cities will adapt and respond to a flooded world.  From misty mezzotints to the futurist visual poetry of Cedric Price (the hissing of wet tyres on runway tarmac) these intriguing images are not proposals proper but evoke what it may feel like to live in a drowned world of refurbished oil rigs and marine infrastructure.  The vantage point tends towards the same distance for each view and engagement with the more up-close realities of the physical environment might have added more interest and intensity.”

Matthew Kernan (Entry no.321) - HABITUAL GREGARIOUSNESS
Jury Citation:
“These painterly images awash with evening light and enlivened by believable detail, summon up the low-key pleasures (and loneliness) of a life lived on a narrow boat along London’s canal network. The understanding of canal edge, landscape gradation from wild to domestic and the softening of the logic of urban form (tower, canopy, mooring) with the quirky construction details of ad-hoc brownfield materials create a comprehensive sense of place that could only be London.”

Mark Phelan (Entry no. 336) – SOCIAL CENTRES IN ATHENS
Jury Citation:
“A number of entries proposed social improvement programmes for the disadvantaged sectors and communities of Athens using a radical constructivist architectural language, beautifully drawn. This presentation with its concentration on the generation of public space as a celebration of community found a meaningful connection between the suspended grids, canopies and sheltering structures and the uses- crafts, markets, produce- which it might support. The graphics interestingly suggest both new structures and the adaptation of existing urban infrastructure.”

Rachel Loughrey (Entry no. 322) – MUSIC IN THE FOREST
Jury Citation:
“This delicate presentation proposes a timber auditorium carefully inserted into its forest location. Its elegant section adapts site contours to the advantage of its acoustic and sightline demands. Graphic treatment is light in line with the tectonic intention of the building. It is let down slightly by the perspective views and a hesitation to commit fully to the logic of timber construction.”

Jury Citation:
“The student showed an excellent approach to the brief and logically addressed all issues. Good detailing and technical skills were displaced in the submission. It was clear from the details that the student fully understood the concepts of low energy design when detailing external envelope interfaces.”

RIAI Architecture Ireland Student Writing Prize 2017, sponsored by Forbo
The editorial board of Architecture Ireland – with support from Forbo – is delighted to launch the third edition of the Student Writing Prize, which is open to all students of architecture and architectural technology on the island of Ireland. The objective of the prize is to nurture and recognise the importance of writing in architecture. Students are invited to contribute an article of no more than 1000 words on a theme of their choice – whether a building or a book; an architect or a movement; both contemporary and historic subject matters will be considered.

Winner Citation
'This fascinating snapshot offers a close reading of monument-making in architectural culture. Set on a journey through Hungary, it is a compelling juxtaposition of childhood innocence with a mature Barthes-like reading of the significance and meaning in architecture and its subsequent reflection in society. The language and descriptive powers of the author are highly effective in moving the reader'.

RIAI Student Award for Sustainable Design in Architecture 2017, sponsored by Dulux
The aim of the award is to recognise the awareness and integration of sustainable design principles by students as an inherent part of their design approach to a project or projects regardless of scale or complexity.