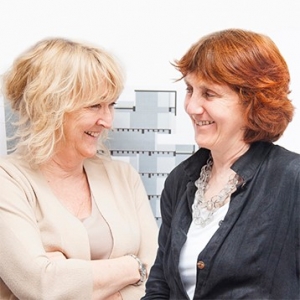 Yvonne Farrell and Shelley McNamara of Dublin, Ireland, have been selected as the 2020 Pritzker Prize Laureates, announced Tom Pritzker, Chairman of The Hyatt Foundation, which sponsors the award that is known internationally as architecture’s highest honor.

“Architecture could be described as one of the most complex and important cultural activities on the planet,” remarks Farrell. “To be an architect is an enormous privilege. To win this prize is a wonderful endorsement of our belief in architecture. Thank you for this great honor.”

As architects and educators since the 1970s, Farrell and McNamara create spaces that are at once respectful and new, honoring history while demonstrating a mastery of the urban environment and craft of construction. Balancing strength and delicacy, and upholding a reverence of site-specific contexts, their academic, civic and cultural institutions, as well as housing developments, result in modern and impactful works that never repeat or imitate, but are decidedly of their own architectural voice.

“For their integrity in their approach to both their buildings, as well as the way they conduct their practice, their belief in collaboration, their generosity towards their colleagues, especially as evidenced in such events as the 2018 Venice Biennale, their unceasing commitment to excellence in architecture, their responsible attitude toward the environment, their ability to be cosmopolitan while embracing the uniqueness of each place in which they work, for all these reasons and more, Yvonne Farrell and Shelley McNamara are awarded the 2020 Pritzker Architecture Prize,” states the 2020 Jury Citation, in part.

“Within the ethos of a practice such as ours, we have so often struggled to find space for the implementation of such values as humanism, craft, generosity, and cultural connection with each place and context within which we work. It is therefore extremely gratifying that this recognition is bestowed upon us and our practice and upon the body of work we have managed to produce over a long number of years,” says McNamara. “It is also a wonderful recognition of the ambition and vision of the clients who commissioned us and enabled us to bring our buildings to fruition.”

Their native Ireland, an island replete with mountains and cliffs, informs their acute sensitivities to geography, changing climates and nature in each of their sites. Their buildings consistently remain purposefully rich, yet modest, enhancing cities and lending to sustainability while responding to local needs. University Campus UTEC Lima (Lima, Peru 2015) is located on a challenging site with a highway sunk in a ravine on one side and a residential neighborhood on the other. The result is a vertical and cascading building responding to both site and climatic needs. Its open spaces were designed to deliberately welcome cooling breezes of the ocean and minimize the need for air-conditioning. At the Offices for the Department of Finance (Dublin, Ireland 2009), the selection of local limestone used in thick panels grants strength to the building. Windows recessed or flush with the façade have grills below them to circulate fresh air throughout the building. Exposures on all sides of the building, atypical of the architecture in this city, offer panoramic views.

The architects are continuously conscious of the dialogue between the internal and external, evidenced by the mingling of public and private spaces, and the meaningful selection and integrity of materials. “What we try to do in our work is to be aware of the various levels of citizenship and try to find an architecture that deals with overlap, that heightens your relationship to one another,” illustrates Farrell. Universita Luigi Bocconi (Milan, Italy 2008) fosters community between its occupants and the vibrant city that extends well beyond the vertical campus through its ground floor public space, which continues indoors, and its floating canopy that overlaps the ground below, engaging passersby with students. Université Toulouse 1 Capitole, School of Economics (Toulouse, France 2019) is encased in concrete and stone that has been quarried from nearby Lake Iseo. Its brick buttresses, ramps and courtyards are a metaphor for the city filled with bridges, walls, promenades and stone towers. North King Street Housing (Dublin, Ireland 2000) is intentionally void of external design elements to resonate with the restraint of the neighboring warehouses.

“The collaboration between Yvonne Farrell and Shelley McNamara represents a veritable interconnectedness between equal counterparts,” states Pritzker. “They demonstrate incredible strength in their architecture, show deep relation to the local situation in all regards, establish different responses to each commission while maintaining the honesty of their work, and exceed the requirements of the field through responsibility and community.”

Farrell and McNamara have mastered proportion to maintain a human scale and achieve intimate environments within tall and vast buildings. “They have tried, with considerable success, to help us all overcome what is likely to evermore become a serious human problem,” explains Justice Stephen Breyer, Jury Chair. “Namely, how do we build housing and workplaces in a world with over half of its population dwelling in urban environments, and many of them who cannot afford luxury?” A contoured theater floor at the Solstice Arts Centre (Navan, Ireland 2008) creates a physical nearness between audience members and performers. The generous placement of open spaces, windows, glass curtain walls and exposed ceilings allows natural light to filter through a passage ofrooms, creating impressions of light through large and small spaces, and within the interlocking areas that compose Institut Mines Télécom in Palaiseau (Paris, France 2019).

McNamara states, “Architecture is a framework for human life. It anchors us and connects us to the world in a way which possibly no other space-making discipline can.” Farrell continues, “At the core of our practice is a real belief that architecture matters. It is a cultural spatial phenomenon that people invent.”

The pair established Grafton Architects in 1978 in Dublin, where they continue to practice and reside. In just over forty years, they have completed nearly as many projects, located in Ireland, the United Kingdom, France, Italy and Peru.

Farrell and McNamara are the 47th and 48th Laureates of the Pritzker Prize, and the first two recipients from Ireland. The only other Irish recipient is Kevin Roche who received the Pritzker Prize in 1982 but practiced in the US.