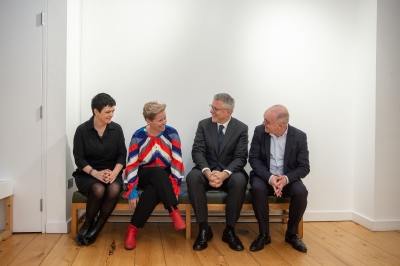 The Irish Architecture Foundation (IAF) was officially convened in February 2005, with the intention to be independent, formative and above all else, ensure that architecture served the people.

The IAF, charged with its values of openness, excellence and courage, set out to establish a network and track record of delivering major projects, primarily aimed at developing audiences for architecture in Ireland, while also raising the profile of Irish architecture abroad.  The local, national and international landscape in which the IAF operates, its achievements to date, and its collective recognition of the importance of architecture provides a rich context for the IAF’s twelve months of celebrations as it sets out, with courage and optimism, a route to delivering its purpose which is: To inspire people to build a better world.

Through the programme, the IAF hopes that new discoveries will be made, new cultural production will be stimulated, and new enterprises will be generated that will grow the desire for architecture in Ireland.

Commenting on the programme of events, Ms Weadick said: “When the Irish Architecture Foundation was founded in 2005, there was marginal engagement with architecture in Ireland outside the industry itself. The IAF was set up with the mission to promote architecture as culture, and through projects such as Reimagine…, a community engagement project with architects and designers in towns throughout Ireland, and Open House Dublin, we have made significant progress in achieving our mission.”

She continued: “Moving forward, the IAF is keen to build on our progress to date – particularly as we face the challenges of the climate crisis, housing, and how we manage our shared spaces in cities and towns. With that in mind, we’ve developed an extensive programme of events over the next year to mark our 15 th birthday and to highlight the importance of our built heritage to wider audiences, and to continue to raise the profile of Irish architecture both at home and abroad.”

Kevin Rafter, Chair of the Arts Council, said: “Over the last fifteen years the Irish Architecture Foundation has grown and developed audiences for architecture in Ireland through its considered programming and events. I look forward to seeing it extend its reach even further, in the coming years, with its ambitious plans for engaging a broad and diverse public with architectural culture.”