Historic buildings in Cork, Laois and Longford all receive top award for conservation from RIAI

Dublin, 19 September: An historic water works, a town library in a former market house, and a cathedral restored after a devastating fire, have all been announced as recipients of the Royal Institute of the Architects of Ireland (RIAI) Silver Medal for Conservation. The RIAI Silver Medal is the highest award for buildings that have undergone a process of conservation and is awarded to the architectural practice several years after the completion of the project so that the success of the building can be confirmed by the passage of time.

The recipients of the RIAI Silver Medal for Conservation are: 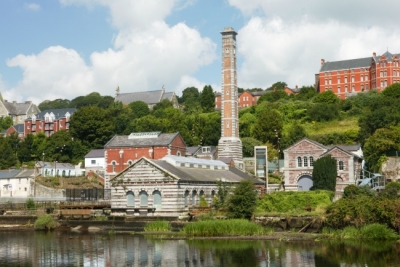 The Old Cork Waterworks dates back to Sir John Benson’s 19th Century Cork City water supply scheme, although water was extracted from the area as far back as the 1760’s. The buildings were conserved and adapted by Jack Coughlan Architects to provide a new role as Old Cork Waterworks Experience featuring a modern interactive display on the themes of water, energy and waste. 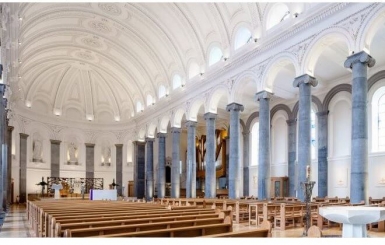 St. Mel’s Cathedral in Longford was very badly damaged by fire in 2009. Built between 1840-1893 and a protected structure, the cathedral is a landmark in the town of Longford. This project restored the Cathedral to its former glory, while also creating a cathedral for the 21st century.

Speaking at the presentation, RIAI President, David Browne, said: “The projects being recognised here today with the RIAI Silver Medal of Conservation, are a testament to the quality of work being delivered in the field of conservation by RIAI members. The protection and restoration of buildings is critical to our cultural heritage and has an important social value as they form an integral part of people’s sense of identity, belonging and place. The conservation of older buildings presents many challenges however we can see how the careful intervention of architects can bring new life to our built environment and enable buildings to be repurposed and adapted for contemporary use.”

Kathryn Meghen, RIAI CEO, said: “The RIAI Silver Medal of Conservation winners are all different in their role and purpose but they have a common thread of being centres within their communities, places of welcome and gathering. One of the aspects of the process that was illuminating to the jury was the level of community involvement and social identification with the projects that we saw. This aspect of architecture serving the community is particularly strong in conservation work, as it forms part of the continuum of cultural inheritance.”

The RIAI Silver Medal for Conservation is supported by Stone Seal.

The Old Cork Waterworks, Jack Coughlan Architects
This project is significant for a number of reasons. In terms of the conservation approach, the disused buildings were repurposed and adapted for their new uses: the site strategy was for minimal intervention, but access from the public realm to the site was approached masterfully. The visitors to the buildings are ‘pumped’ up to the higher level in a glass and concrete lift, leading on to a bridge at the upper level. Thus the action of gravity on water and humans is reflected in the programme. This single decision to insert a very strong new piece into the site enables our understanding of the rest of the site. The existing buildings are treated with care, with openings and access developed seamlessly, with little impact on the buildings. The levels of repairs carried out reflect a modest brief and modesty is apparent in the consideration and execution of the works.

Abbeyleix Library, de Blacam and Meagher
Ten years after its completion, the work to this nearly 200-year-old building stands out as an urbane addition to the community. The central room with its three storeys of books is as fresh today as it must have been when the conservation works were completed. The simplicity of the concept has stood the test of time. The discovery, exposure and incorporation of the suspended timber vault adds a richness to the centre of the building. While the brief required the separation of the exhibition gallery use, the architects’ rearrangement of the entrance to the Library mitigates the loss of direct access to the Market Square. The jury were taken by the subtlety of the detailing, such as that of the bookshelves, which have curved fronts to the shelves interpreting the retrieval and re-insertion of books. That subtlety extends to all parts of the building, including the subsidiary service spaces. It also extends to the design of the external public space, with the changes in surface finishes indicating routes and its restrained landscaping.

St. Mel’s Cathedral, Fitzgerald Kavanagh + Partners in association with Richard Hurley
St. Mel’s Cathedral was destroyed by fire on Christmas Day 2009. Very quickly the clients decided to restore the building, rather than build a new one. They appointed Richard Hurley, FRIAI (1932-2011) and Fitzgerald Kavanagh as their architects. The team engaged in considerable research, resulting in a studious analysis and programme of repair, renewal and reconstruction. The combination of the liturgical and conservation knowledge of the team has resulted in an exceptional example of collaborative work. The involvement of the community in the entire process is a credit not just to the client, but to the architects, whose inspired approach to the process ensured their engagement and their identity with the cultural inheritance of this building. The integration of technology in the building is subtle as is the exposure of the potential of the vaults. The level of technical knowledge, skills and craft evident in the completed building is a result of the commitment and dedication of the architects to the project.

The Conservation Medal jury visited the nominated buildings for the Silver Medal for Conservation for three periods – 2005-2007, 2008-2010 and 2012-2013.  In their deliberations, the jury referred to the internationally regarded Burra Charter (adopted by Australia ICOMOS and the Heritage Councils in Australia) and considered some of the words that were relevant to what they sought: “Exemplary, Substantial, Innovative, Collaborative, Inspiring and Sensitive, as well as Inheritance and the Retention of Cultural Significance”.

The Jury also gave commendations to the following projects:

The RIAI Silver Medal for Conservation is supported by Stone Seal.

About the RIAI: Founded in 1839, the Royal Institute of the Architects of Ireland supports and regulates the architectural profession and promotes the value that architecture brings to society for everyone’s benefit. Follow us on Twitter @RIAIonline and Instagram riaionline.