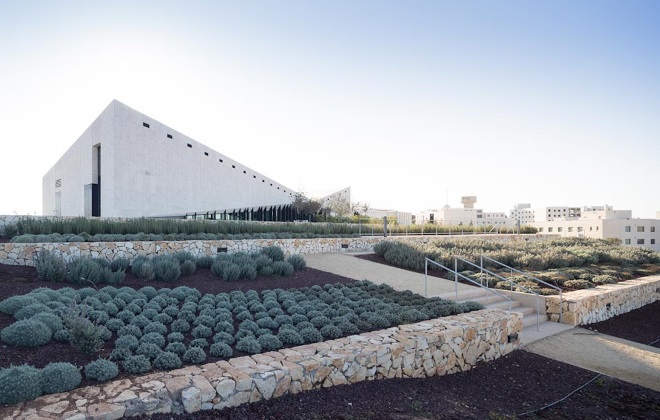 Dublin-based heneghen peng architects are among the 2019 Winners of the prestigious Aga Khan Award for Architecture.  The Award was established by His Highness the Aga Khan in 1977 to identify and encourage building concepts that successfully addressed the needs and aspirations of communities in which Muslims have a significant presence. The Aga Khan Award for Architecture’s mandate is different from that of many other architecture prizes: it not only rewards architects, but also identifies municipalities, builders, clients, master artisans and engineers who have played important roles in the realisation of a project.

The winners share a prize fund of US$ 1 million between them.

The Palestinian Museum, in Birzeit was also a Winner in the RIAI Awards 2017. “The building crowns a terraced hill overlooking the Mediterranean and is the recipient of the LEED Gold certification because of its sustainable construction”, say the judges. “The zigzagging forms of the Museum’s architecture and hillside gardens are inspired by the surrounding agricultural terraces, stressing the link with the land and Palestinian heritage.”

Other award-winning projects include:

Bahrain: Revitalisation of Muharraq, which highlights the World Heritage site’s pearling history, was first initiated as a series of restoration and reuse projects. The project evolved into a comprehensive programme that aimed to re-balance the city’s demographic makeup by creating public spaces, providing community and cultural venues, and improving the overall environment.

Bangladesh: Arcadia Education Project, in South Kanarchor, a modular structure – incorporating space for a preschool, a hostel, a nursery and a vocational training centre – that takes a novel approach to a riverine site that is often flooded for five months every year. Rather than disrupting the ecosystem to create a mound for building, the architect devised the solution of an amphibious structure that could sit on the ground or float on the water, depending on seasonal conditions.

Russian Federation: Public Spaces Development Programme, in the Republic of Tatarstan, a programme that, to date, has improved 328 public spaces all over Tatarstan. The ambitious programme sought to counter the trend toward private ownership by refocusing priorities on quality public spaces for the people of Tatarstan. It has now become a model throughout the Russian Federation.

Senegal: Alioune Diop University Teaching and Research Unit, in Bambey, where a scarcity of resources led to the use of bioclimatic strategies, including a large double roof canopy and latticework that avoids direct solar radiation but allows air to flow through it. By employing locally familiar construction techniques and following sustainability principles, the project succeeded in keeping costs and maintenance demands to a minimum, while still making a bold architectural statement.

United Arab Emirates: Wasit Wetland Centre, in Sharjah, a design that transformed a wasteland into a wetland and functioned as a catalyst for biodiversity and environmental education. While its indigenous ecosystem has been restored, it has also proven to be a popular place for visitors to appreciate
and learn about their natural environment.

The 2019 Award Master Jury
The nine members of the 2019 Master Jury are: Anthony Kwamé Appiah, an Anglo-Ghanaian American philosopher; Meisa Batayneh, founder and principal architect of maisam architects & engineers; Sir David Chipperfield, whose practice has built over 100 projects for both the private and public sectors; Elizabeth Diller, a founding partner of a design studio whose practice spans the fields of architecture, multi-media performance and digital media; Edhem Eldem, a Professor of History at Boğaziçi University (Istanbul) and the Collège de France; Mona Fawaz, a Professor in Urban Studies and Planning at the Issam Fares Institute of Public Policy at the American University of Beirut; Kareem Ibrahim, an Egyptian architect and urban researcher who has worked extensively in Historic Cairo; Ali M. Malkawi, a professor at Harvard University’s Graduate School of Design and a founding director of the Harvard Center for Green Buildings and Cities; and Nondita Correa Mehrotra, an architect working in India and the United States, and Director of the Charles Correa Foundation.