Architect and TU Dublin Lecturer Noel Brady MRIAI has won a commission for a sculpture installation at Fort Dunree, Co. Dongeal. Called Gathering, the sculpture is a collection of 3 creels and is the outcome of an Artlink open exhibition call, and is made possible by a generous grant from The Arts Council.

The sculpture is in situ over the summer at Fort Dunree and possibly longer. 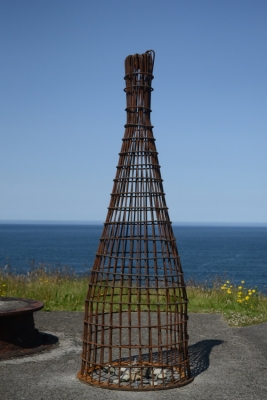 This proposal takes a number of sources as inspiration for establishing a temporary (permanent) art work at Fort Dunree. These include a nod to the pilgrim trail (Turas Colm Cille) of St. Columba (Colmcille), where the pilgrim is entreated to mark various sites by circumnavigating various crosses and stele three times (“The pilgrim circles the cairn three times, praying, and then, placing his back to the stone, makes a declaration renouncing the World, the Flesh, and the Devil.”).  In two instances there are three circles (Cloch an Aonaigh, “The Stone of the Assembly” & Gannew and Curreen townland) located on a single cross and in another three squares (Straid townland, with echoes of the labyrinth). This composition has three vessels for gathering, which echo the form of wicker baskets and creels, shaped in part like ballistic shells.

The material framework provides the visitor with a legible framework and interactive container. Visitors are encouraged to carry with them a stone (white) to locate in the container.  Over time the artefact and its material reality will change, according to its exposure and its vulnerability to the elements.

Further details of the exhibit can be found here. 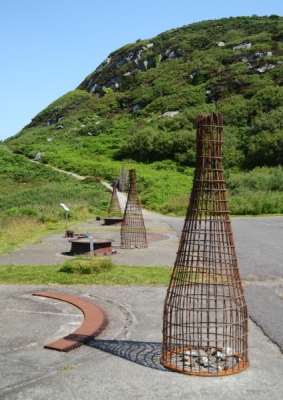