While making a documentary about Dublin’s Liberty Hall in 2009, I was introduced to the work of Oisín Kelly (1915-1981) by a contemporary of his who called him a genius. It was the building’s architect, Desmond Rea O’Kelly, who told me about the Oisín Kelly sculpture Two Working Men, that was commissioned to stand looking up at Liberty Hall but instead ended up in Cork. Des loved Kelly’s depiction of two generations of Irish workers admiring their own work.

In this 2007 interview, the architect of Liberty Hall, Desmond Rea O’Kelly, talks about the story of Two Working Men and Liberty Hall. Widely known for his church work and years spent at Kilkenny Design workshops, Oisín Kelly was for the most part a self-taught sculptor. He did however briefly study under sculptor Henry Moore. When Kelly wrote to Moore asking for a job, Moore did not hire him but instead invited Kelly to come and study under him in Chelsea Polytechnic. Though Kelly went with a desire to create work in a similar style to Moore, when he got there Moore demanded of Kelly, as with all his students, that they learn strict form and figure with absolute faithfulness to the model. After this induction Kelly never returned to abstract work, so paradoxically, as Dorothy Walker noted in a 1978 solo show exhibition catalog, ‘Moore cured Kelly of Moorism.’

When Oisín Kelly was starting out in the Ireland of the late 1940s, the only commissions going for sculpture were in churches, as many were being built at the time. In 1949 the architect Liam McCormick gave Kelly his first church commission for the Holy Rosary Temporary Church (still there today) on the Ennis Road in Limerick. He went on to collaborate with McCormick regularly, including on McCormick’s much celebrated church at Burt, in Co. Donegal. A highlight of his religious work was a government commission to design a silver figure of St. Patrick which was presented by Taoiseach Jack Lynch to Pope John Paul II on his visit to Ireland in 1979. Interestingly much of his church work was for Catholic churches even though he himself was Protestant. His work was often praised for its not-sentimental approach to religious iconography.

As his son Fergus writes in a 1989 article for the Irish Arts Review, ‘One of the effects of the Second Vatican Council was a decreased demand for religious statuary, so in the late ‘60s and ‘70s Oisín found that he was getting fewer church commissions. To some extent this gap was filled by State commissions. The largest of these was for the centrepiece of the Garden of Remembrance in Parnell Square’ [1].

Children of Lir (1964)
Kelly’s friend, the architect and city planner, Dáithí Hanly won the competition for the design of the Garden of Remembrance and proposed Kelly to create the sculptural centrepiece. This was a huge commission for Kelly at the time. As Judith Hill mentions in her book Irish Public Sculpture, ‘He struggled to find an appropriate theme and expression for a sculpture which was to carry the symbolic and, as he put it, “spiritual” expression of the garden’ [2]. He was looking for a new nationalist iconography.’

Kelly came up with the Children of Lir transforming into swans as a symbol of the painful but dramatic birth of the Irish State. He is quoted when asked about the symbol of the swan: ‘As a symbol it was preferable to the “dictatorial eagle”: I should like a memorial which does not attempt to bully my countrymen into having splendid thoughts and noble feelings … but rather one whose message was implicit, a hint rather than a shout.’

The government of the day objected to the ‘pagan theme’, so it was delayed but they eventually relented when the Arts Council intervened with high praise saying ‘it would prove to be one of the masterpieces of Irish sculpture in this century.’

Kelly needed to study a swan’s anatomy so he tried to get a swan carcass from Dublin Zoo, CIÉ (who looked after the canals) and the ISPCA. He finally got one from the Dublin Dogs and Cat Home. He took it to his own home and lightly boiled the swan so that he could remove the flesh and study the bone structure. 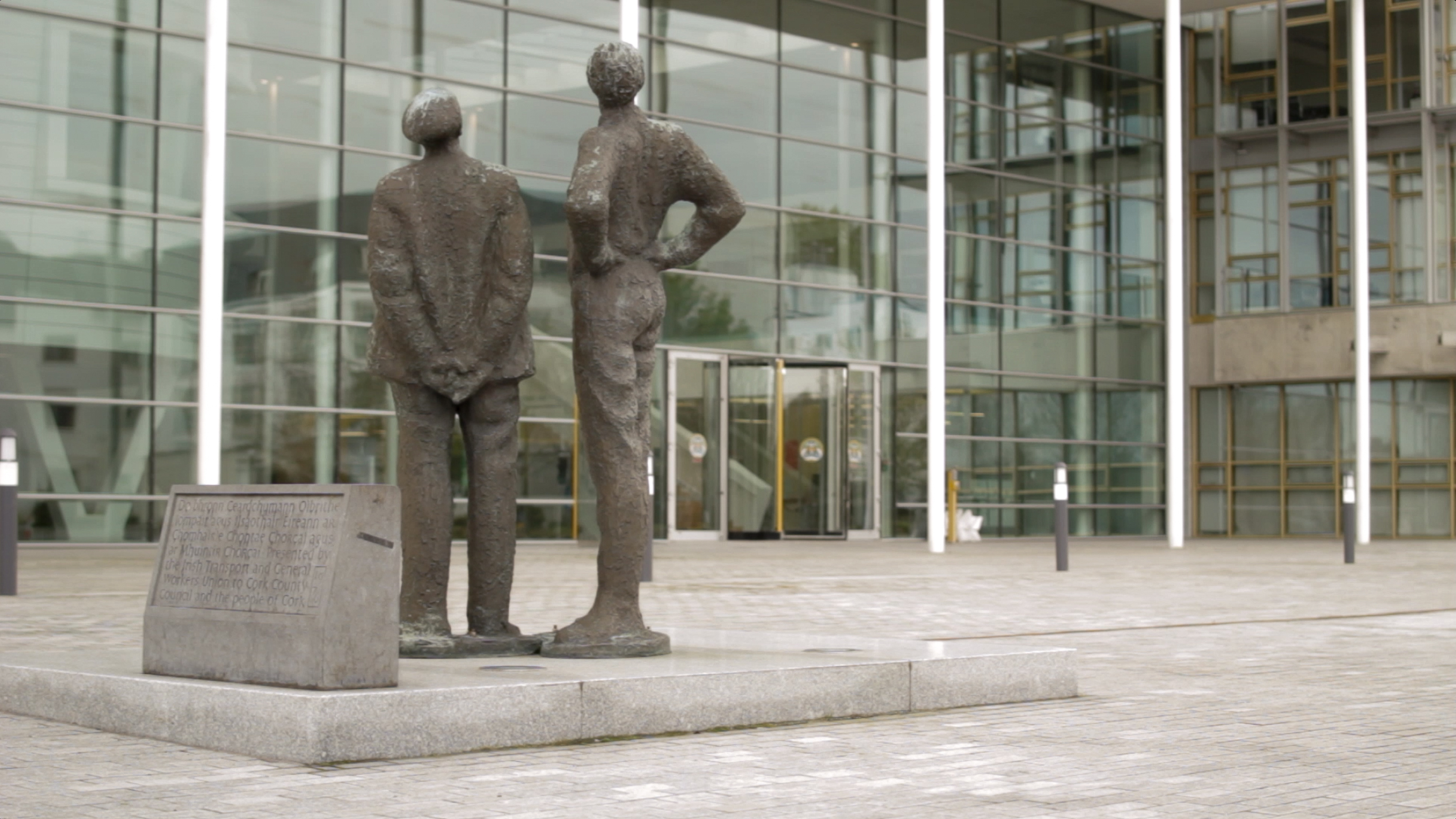 Two Working Men (1969)
Two Working Men was commissioned by the ITGWU and was to be erected across from the new Liberty Hall for the building’s opening in 1964, which coincided with celebrations of fifty years of the Union. The sculpture that Oisín Kelly came up with was two men standing at the base of the building looking up and admiring the brave new future for the Union, symbolised by Dublin’s tallest building.

It was modelled and then cast in Germany, but just before it was to be placed outside Liberty Hall, a local councillor launched a campaign against the sculpture. After a long battle the councillor won out when the Pavements Department deemed the sculpture would be a ‘traffic hazard’. The sculpture went into storage. Eventually with the realisation that it would not be allowed outside Liberty Hall, the Union decided to give it to the newly constructed Cork County Hall (1969) building which was built a few feet taller than Liberty Hall. 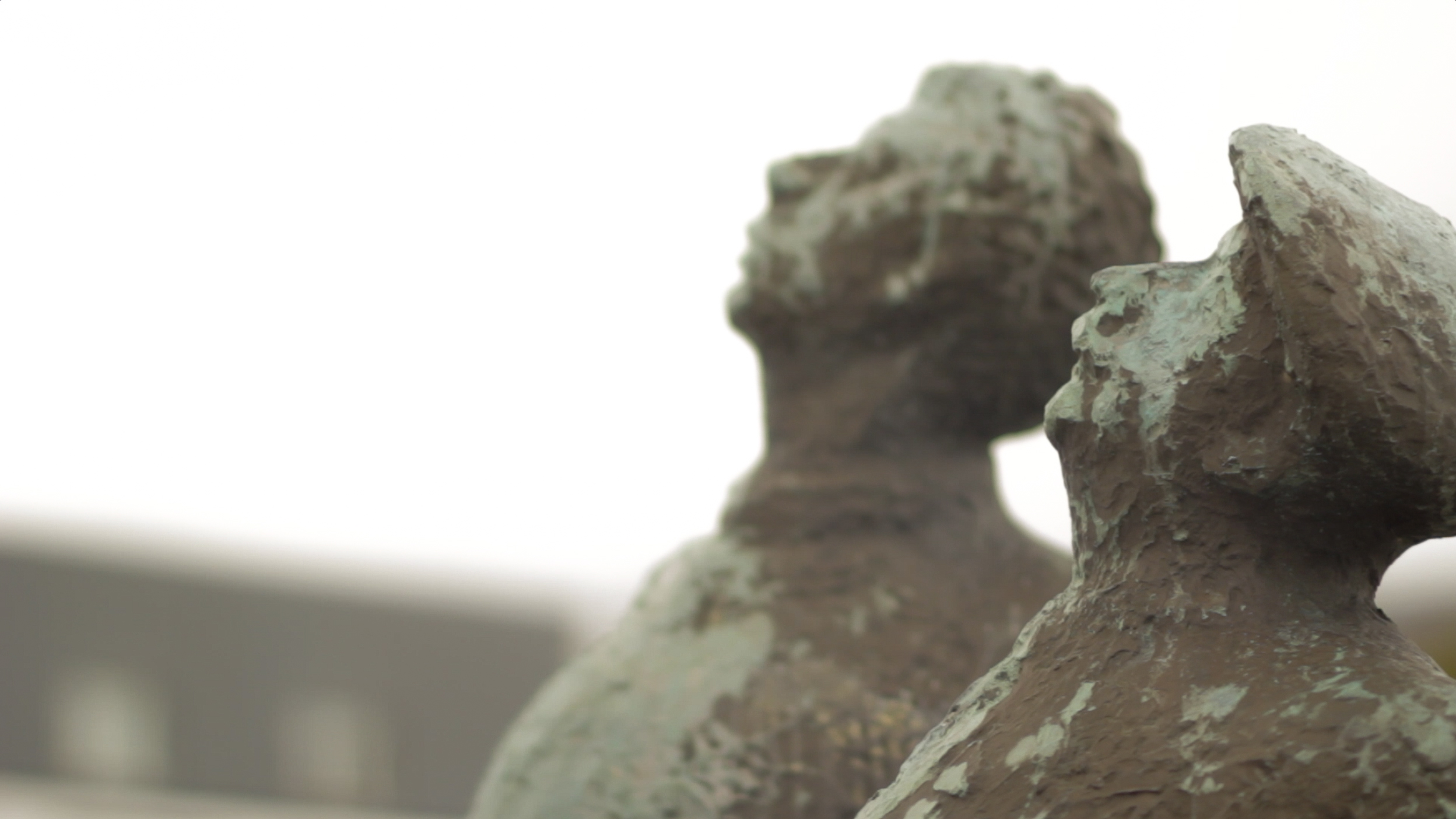 They are still there today and though they have no direct relevance to the building’s story, they look well gazing up at the adjacent tower. They became known locally as ‘Cha and Miah’ after characters in Hall’s Pictorial Weekly.

Two Working Men was not the only Kelly sculpture to find controversy and be moved from its intended location. In 1971 he was commissioned to make a Roger Casement monument in Glasnevin Cemetery. He created a bronze sculpture of Casement in handcuffs, but just before it was to be erected there was a change in government and the new administration wanted nothing to do with it. So as with Two Working Men, the Casement sculpture was placed in storage. For a time it was due to go to Casement’s birthplace in Sandycove, Dún Laoghaire but this too caused complaint. Eventually it was given a permanent spot in Ballyheigue (near Banna Strand where Casement came ashore and was arrested) in Kerry in 1984.

Jim Larkin (1977)
The 12-foot tall statue of Jim Larkin was only the second commemorative figurative monument to be erected in O’Connell Street in the twentieth century, unveiled by President Hillery in 1979 with Soviet Ambassador Anatoli Kaplin in attendance, among others. It was seen as symbolic for the main street of Ireland’s capital to have a statue of a trade unionist.

Kelly took inspiration from the famous photograph of Larkin in a pose with his hands thrown wide while addressing a crowd. He made Larkin’s hands larger than life to give extra punch to the famous slogan below the statue: ‘The great appear great to us because we are on our knees: let us rise.’

As Paula Murphy wrote in the Irish Arts Review in 2013, ‘the commission was offered directly to Oisín Kelly. Although far from democratic procedure, it was in many ways understandable, as Kelly had carried out several substantial public works at this stage and must have appeared to be the most experienced sculptor for such an undertaking [3]’. As with many of Kelly’s works the Jim Larkin piece was cast at Dublin Art Foundry, this particular work by Leo Higgins and John Behan.

Chariots of Life (1978)
Kelly’s largest work, Chariots of Life, is behind hoarding at the moment after enjoying its spot in the courtyard of the Andy Devane Irish Life building on Abbey Street since 1978. It’s currently getting moved forward to a more prominent position closer to Abbey Street. Fergus Dowd of Irish Life has said, ‘the sculpture’s position means it has been slightly hidden from view of the public passing by on Abbey Street. As part of a major upgrade of the Plaza we are excited to be bringing Chariots of Life forward in the plaza to a more prominent location and within a new water feature.’

Kelly said the idea was drawn from the Chariot of Fire image used by William Blake. He had been asked by Irish Life to do anything on the subject of life.

During the crucial plastering stage Kelly suffered a heart attack. Although he made a recovery and was able to get the piece to the foundry in Italy, he did not live to see his largest work unveiled at the Irish Life Centre.

Kelly liked to demystify the artistic experience. In his view, it is false to make a distinction between art and craft and he regarded himself as more of a craftsman. He worked for fun and said its correct meaning was folly. ‘If I had a slogan – which I haven’t – it’d be that line from the Shadow of a Gunman: Put a bit of poetry into the hearts of common people.’