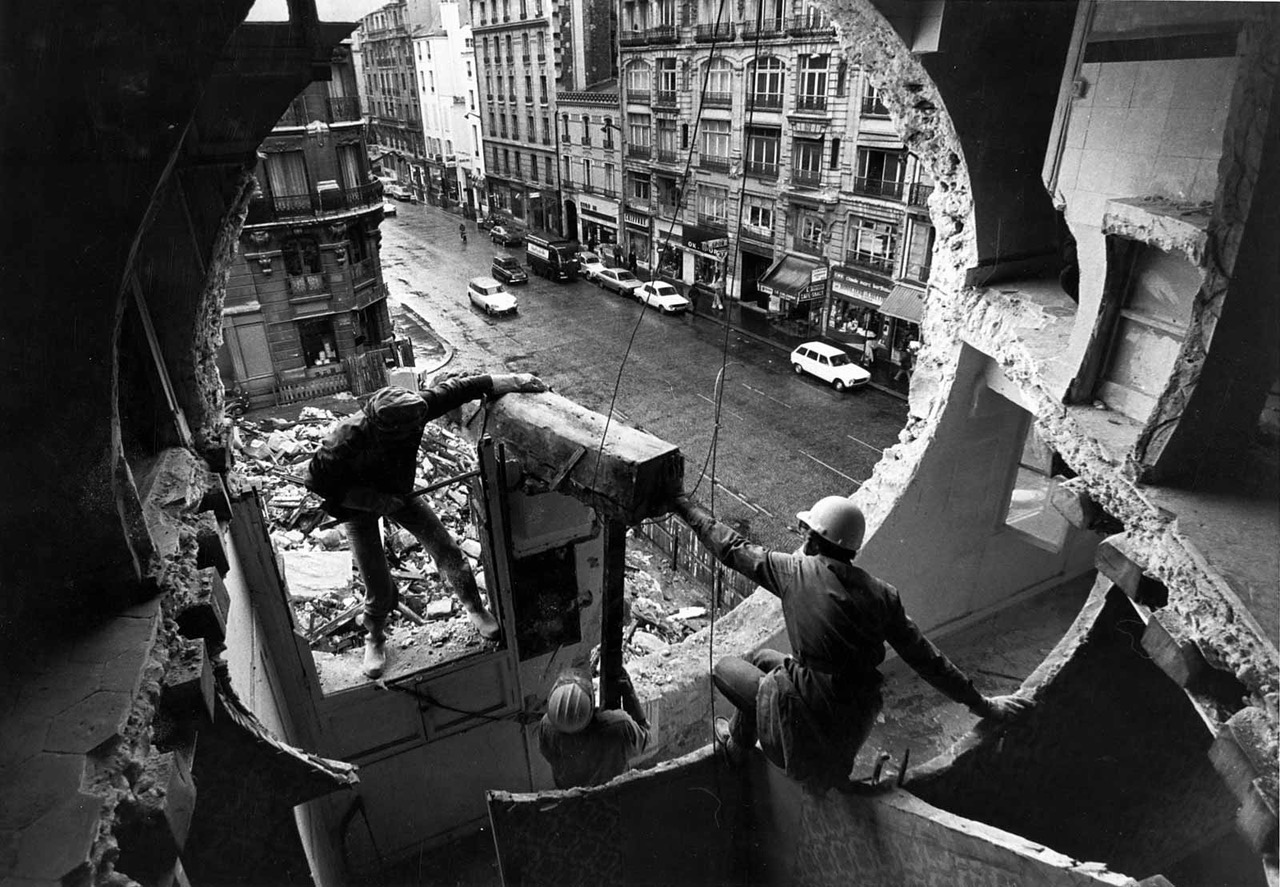 Architecture is inherently linked to policy, politics, and power. With a responsibility for the design and perception of the built environment, architects have a distinct role in shaping the human urban experience. As the world confronts issues of climate change, forced migration, and affordable housing, architects are increasingly putting themselves on the front line of the debate, using a variety of tools and avenues to clamour for change, and indeed design for it. However, while many official avenues exist for architects to advocate for social and environmental reform, there is an under-theorised method of resistance, a ‘road less travelled’ for social progress beyond officialdom.

With crafted skills centred on the human perception of space, architects can engage in a movement seeking to use architecture as a raw material for unsanctioned artistic intervention. For architects increasingly alarmed at a perceived lack of political action to the world’s pressing issues, and eager to use their skills to promote change, artistic urban activism has the power to spark awareness, dialogue and reform.

Whether abstract or spatial, the arts has a unique ability to evoke a reaction within the observer or participant, unlocking new points of view, and new frames of mind. This capacity lies central to ‘the ability of art to function as an arena and medium for political protest and social activism’ (Groys, 2014, p.1).

Whilst the role of art as ‘criticism’ has existed for decades, a recent global phenomenon of art ‘activism’ has reached beyond critique. ‘Art activists try to change living conditions in economically underdeveloped areas, raise ecological concerns…attract attention to the plight of illegal immigrants, improve the conditions of people working in art institutions, and so forth’ (Groys, 2014, p.1). There are several media through which this artistic activism can manifest, including musical, literary, dramatic, visual, or spatial.

The power of art as activism lies in the unique ability of art to break the emotional barriers of the observer. The origin of this power can be traced back to childhood education, where almost all pupils would have experienced the arts, enlisted in dance, painting, music, photography, poetry, pottery, and at a pre-school level, more improvisational activities such as pencil, crayon, and collage drawings. Set aside from cognitive-based, ‘right or wrong’ subjects such as mathematics, science, or language, ‘art capitalizes on the intuitive self ability to spontaneously express itself and provides a less judgemental framework’ (Shank, 2004, p.535). To the young, art is an experience where judgement is replaced with respect, and prejudice with intuition. Activist art rediscovers and reignites this alternative channel of thought within the observer in an adult life dominated by cognitive constructs.

This marriage of cognitive and emotional argument permits ‘the transformation of entrenched world-views [in] a process that requires immense emotional intelligence, symbolic dexterity, and cultural sensitivity … procured by means of traditional fact-based activism and spurred by strategic art activism’ (Shank, 2004, p.555). As a catalyst of transformation, art activism succeeds in winning both ‘hearts and minds’, a powerful yet underutilised tool the arsenal of social justice. For architects, artistic activism is spatial activism. It is the occupation of public space, and the alteration of the built environment to awake the user’s emotional and cognitive capacities. It is activation of the urban realm as a stage of creativity, a place of protest, and a vehicle for changing hearts and minds.

Within the realms of the art world, there exist many avenues for spatial activism to operate. However, at present, there are few definitions or supportive theories behind the enactment of urban activism. One exception is a concept known as ‘Cultural Hijack’, coined by the activist, artist and academic Dr Ben Parry in 2011. Cultural Hijack can be interpreted as a moment, a method, or a movement. Regardless of label, it centres on the use of spatial intervention as a challenge to social norms. Always site-specific, Cultural Hijack seeks to connect with the public in real-time. By exploiting the power of the different, the curious, or the absurd, Cultural Hijack seeks to momentarily broaden the human mind, to open our consciousness to new ideas, new challenges, and new perspectives on the heated topics of the day.

Cultural Hijack frequently operates beyond the realms of commissioned public art, with operators consisting of ‘a small number of artists and artist groups … who explicitly link their artistic practices to radical social or political transformation’ (Sholette, 2017, p.160). The intervention is often unsanctioned, with the interventionist working in the shadows, or part of an underground movement using artistic means to advance social and political dialogues. ‘The unofficial practice of the interventionist often takes place on the margins of the official city where it can exploit gaps in formal regulation and control’ (Parry, 2011, p.31).

Architecture can play a central role in Cultural Hijack, an act heavily dependent on site-specificity. Using architecture as its raw material, ‘cultural hijack moves from abstract space (the world of images and signs) towards the real space of the city’ (Parry, 2011, p.28). By manifesting itself in real time, and real space, the observer becomes a participant, rooted in a real-world experience. In the act of Cultural Hijack, the city becomes a blank canvas, ready for manipulation, appropriation, and protest.

The activist works of American artist Gordon Matta-Clark ‘defined the do-it-yourself, unsanctioned interventions that embodies the spirit [of Cultural Hijack]’ (Parry, 2011, p.14). Matta-Clark occupied disregarded spaces of New York City, including a rubbish disposal unit transformed into a street theatre (Open House, 1972) and a homeless shelter composed of waste materials (Garbage Wall, 1970). Through impromptu interventions in real time, Matta-Clark sought to ‘create artworks that triggered reactions in the viewer beyond the normal, somewhat restricted aesthetic frisson available to the gallery-goer’ (Atlee, 2007). As with most acts of urban activism, Matta-Clark’s work was part-critique, and part-reformist.

In contrast to Matta-Clark’s use of leftover, sub-prime urban space, Cultural Hijack can also occupy prime public spaces, at the heart of urban environments. German artist Jochen Gerz offers a powerful example of artistic intervention in core public space with his intervention titled Monument Against Racism (1993). Working in the dead of night over a period of three years, Gerz and his students removed over two thousand cobblestones from the main square of the provincial capital city Saarbrucken, Germany. Once removed, the underside of each cobblestone was etched with the name of a desecrated Jewish cemetery destroyed during the Second World War. The cobblestones were then re-laid, name faced down, creating an invisible monument to wartime atrocities committed against the Jewish community. The unsanctioned intervention was subsequently discovered, and retrospectively commissioned, with the former Castle Square officially renamed the Square of the Invisible Monument.

There is a heavy contrast between the interventions of Matta-Clark and Gerz, with regards to scale, place, exposure, and manifestation. Where Matta-Clark lays claim to spaces of neglect, Gerz occupies prime public space at the symbolic centre of the political urban realm. Where the work of Matta Clark is unapologetically disruptive, the work of Gerz is subtle and invisible. Where Matta Clark responded to an ignored present, Gerz responded to a forgotten past. Despite their differences, each share a common underlying principle of site specificity, of using the existing built environment as a raw material for artistic expression.

In a society where heart and mind are entwined, any movement for change must likewise entwine the emotive and cognitive. The advent of artistic activism has therefore unveiled a powerful, underutilised tool of social justice. It has also created a new generation of artists, ‘the resistors: artists who use their art to resist the forces of the powerful … everyone from antiwar poster artists to artist activists’ (Thompson, 2017, p.7). A catalyst of transformation, art activism bridges a void, connecting with the observer or participant on in an emotional capacity that cognitive argument struggles to convey.

Cultural Hijack is not the only avenue through which architects and urban designers can engage in artistic activism. However, in practice, Cultural Hijack has embodied the architectural mantra of ‘design for impact’. With the city being transformed into a blank canvas for activist appropriation, Cultural Hijack offers the urban public an opportunity for reflection and critical engagement, congregating in an unorganised, yet powerful solidarity; a demonstration that urban activism can be a vehicle of change, and that architects can be its agents.

Niall Patrick Walsh is a Senior Editor at ArchDaily, the world’s most visited architecture website. He is also an architectural assistant at BDP, one of the largest design firms in Europe. He holds a Masters in Architecture from Queen’s University Belfast and is currently based in Dublin.