The RIAI awarded a Highly Commended certificate to PKA Architects for Social Housing project at Sean Treacy House at the joint National Housing Conference on 14 February at Dublin Castle. Traditionally the conference has been the occasion for the presentation of the RIAI Silver Medal for Housing – the country’s premier award for residential architecture. However the impact of the economic conditions of the recession, coinciding with the award period of 2011-2013, was evident and the RIAI have decided not to award a Silver Medal for this period. Speaking at the presentation at Dublin Castle, RIAI President Carole Pollard said: “We are confident with the renewed focus on delivery of residential schemes that we will return to pre-recession levels of qualifying projects next year. We extend sincere congratulations to the commended architects who have worked hard to deliver housing during difficult economic times.”

The jury for the Silver Medal for Housing was appointed by Council in 2016 and comprised: Joe Kennedy (Chair), Andrew Griffin, Niall Rowan, Dougal Sheridan and Giulia Vallone.

Jury Citation: The jury commended the well-considered handling of the main building volume to Buckingham Street Lower and the corner to Empress Place, with a controlled and dignified elevational treatment achieving successful integration into the Georgian context without resort to pastiche or gimmick.   The jury also commended the use of a courtyard typology as an appropriate response to the challenging context, creating a haven of passively over-looked semi-private space and amenity, which has a palpable sense of occupation and activity.  The jury felt that perhaps a more appropriate brief and / or budget could have overcome some issues pertaining to landscape and play areas. 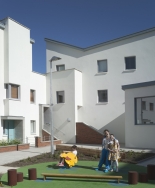