The jury were impressed by the sensitivity with which this challenging extension has been executed. The juxtaposition of spaces and exploitation of site levels together produce a careful and confident architectural gesture without unnecessary deference to the strongly expressed style of existing buildings.

The decision to combine both the French and German Schools of Ireland on the existing German School site necessitated the provision of an additional 16 language classrooms, an extended administration area and a shared new entrance. The site made available for such an extension being an existing car park meant that a clear strategic shift was required to overcome the dominance of the car in favour of external circulation and spaces for staff and students in a campus setting.

The new school wing, part two-storey part three-storey in height, extends into the site pushing as many car spaces as possible to the site perimeter. As no large communal room formed part of the brief, attention focussed on making a number of external spaces that could gather the new campus population together. Canopies, benches, paths, corridor and ramp make the connective, informal realm between the school’s spaces and levels. An episodic internal circulation route of varying width and orientation is provided where students can pause informally outside classes on benches.

The building was intended to house both French, German and Irish secondary school students and act as a link between the existing German-Irish School and the Lycée Français d’Irlande and we wanted the design to be as original as the idea behind the building project. Furthermore, this new design had to complement the existing school buildings and meet stringent cost constraints.

The architects produced an innovative design which caught the imagination of the Boards of the two schools and that of the teachers and parents alike. Its proposed use of common spaces such as the canteen, music room, teachers common room and the new academic courtyard were key factors in persuading all parties that the building design itself would assist in the integration of the two school communities – at all times the key concern of those managing the project.

The building was completed on time in September 2008 and final result has been an unqualified success with plaudits and gratitude from all parties and, in particular, the teachers and pupils who are main users of the building. This is a building of which everyone can be proud. 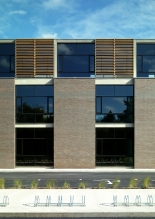 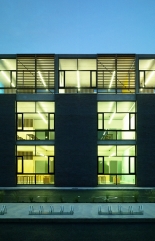