A Dublin based architectural practice, DTA Architects, headed by architects Derek Tynan and Niall Rowan, has won the Royal Institute of Architects in Ireland’s (RIAI) highest award for housing design, the Silver Medal, for its work on a social and affordable housing scheme built in Santry Demesne, Dublin.

The award, which is only made every two years, is for schemes completed in the years 2009 and 2010. The DTA design was chosen from nine shortlisted schemes.  This is the third time that DTA Architects have won the Silver Medal award. The award was presented at a ceremony that took place Monday 9th February.

The judging panel, made up of six leading architects, said of the winning scheme, ‘The housing responds in an assured and carefully calibrated way to its context…The concept of the interlocking units is a clever idea that is deftly executed to provide a genuine sense of intrigue, space and ownership, semi private and private space oscillates between front and back. The units are spacious, bright and have their own sense of individuality without any level of contortion that can sometimes arise when executing this type of spatial juxtaposition. There is real architectural skill in designing housing of this nature that works from outside to in and vice versa. One can imagine the lives of families interrelating and growing up happily in apartments such as these.’

Commenting, Robin Mandal, the RIAI President, said, “It is timely that such a wonderful social and affordable housing scheme has won our highest housing award. This demonstrates that there is no need to compromise on excellence in design for any type of housing. Good design is good design and is not budget dependent. This winning scheme sets a high bar for other social and affordable schemes and they should be measured against this Silver Medal winner.

Niall Rowan, Partner Silver Medal winners DTA Architects said, We are really delighted that the Medal is awarded to a high quality housing development which is directly the outcome of a period during the mid-noughties of a government commitment to investment in social and affordable housing. This project for social and affordable housing was initiated by Fingal County Council Housing Authority, commissioned by their Architects’ Department, approved by Councillors under a Part XI process and directly funded by the Department of Environment Community and Local Government.

The design responds to a brief which put strong emphasis on own front door access and apartment mix/size, with an unconventional and typologically innovative organisation of predominantly three bedroom and duplex apartments, all with generous internal open space, and compatible with sustainable family and lifetime occupation. These individual apartments are combined to create a overall form coherent at an urban level, framing and centring on a new public realm environment, in direct response to the challenges of an edge city site which was dislocated from its immediate surroundings by roads, boundary walls and undeveloped sites.

As housing faces new challenges in terms of procurement and regulation, we believe that it is critical that all stakeholders maintain an ambition to provide quality for all housing tenures and types, as a long term investment in communities and the physical environment.' 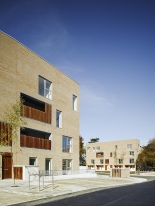