Set in a valley between the Coomeragh mountains and Slievenamon this project's refinement of making in a special place combines with it's lean use of materials to create an architecture of memorable and elegant simplicity.   Nestling on a hillside offering a remarkable array of seasonal colour and scents, enveloped by the rushing sounds of the waterfall and stream which is a tributary to the Suir, the scale and complexity of the Poustinia design is derived from its role as a hybrid of architecture and landscape which somehow succeeds in transcending both.

The name derives from an old Russian word which designates a small enclosed space set aside for meditation and silence. Meditation is integral to an increasing international culture of mindfulness and spirituality to which this project is devoted. Commissioned  and administered by the Rosminian Order it's impact is reflected in the visitor numbers  from Europe, US and Asia.

Close to mature broad leaf trees Poustinia is impeccably detailed and built. Every element is exquisitely considered. The rooms cantilevered off the hillside make the lightest of footprints. The cranked plan configuration with bespoke furniture and floors of local limestone entrap smooth plastered internal space to overlook a wider strikingly contrasting landscape. External walls and roofs fuse in a composition of alternating rough sawn douglas fir and smooth sawn larch strips. The contrasts of this wonderfully enigmatic project are resolved in ways which evoke its very spirit. Contradictions are synthesised in a clear and simple idea suggesting a conjunction of the temporal and the transcendent. 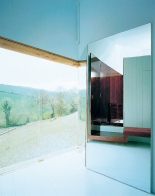